The collaboration of Jasmin Guérard Alie and Simon Bachand, two artists who already shared the same crazy desire to perfect their art rooted in the graffiti culture, gave birth to the ArtduCommun collective.

With enough perseverance and audacity, they were able to transpose and evolve their talent into mural art.

The significant mural of the Old Brewery Mission is one of their very first creations. This project was born out of the city of Montreal’s desire to mark the 40th anniversary of Expo 67, which was a major turning point for the city, marking the beginning of the cultural effervescence that we know today.

It was a big challenge because of the size of the area at the time, and they have fond memories of it.

“We worked on the mural for two and a half months, during which time we were in contact with the residents of the Old Brewery Mission. Some were curious to see what was going on, others told us about their lives. That’s when we realized how quickly we can fall into homelessness. In the years that followed, we would sometimes run into these people on the street, and we could check up on them,” says Jasmin.

To celebrate the 15th anniversary of this artistic production, the duo has chosen to revisit it and dive back into its universe. Usually adept at using giant canvas, the artists have deliberately chosen to play with proportions by creating a set of commemorative paintings on a human scale.

These are carefully executed works, which certainly illustrate the major themes of the original mural, but with their own flavor and the fruit of all the experience acquired in terms of technique and composition.

These pieces become unique creations that reflect the cultural richness of the mural, paying tribute to it and ensuring its longevity.

The creative challenge was very interesting, but the opportunity to contribute to the Old Brewery Mission’s vocation was also stimulating, since a portion of the profits from this exhibition will be given directly to the organization.

In addition to the body of work, the collective is offering for sale a limited edition photographic reproduction of the mural, with 50% of the proceeds going to us.

To purchase a photographic reproduction of the mural: https://missionoldbrewery.fundkyapp.com/fr/art-du-commun 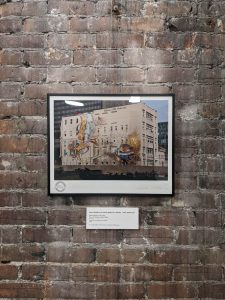 Art at the Old Brewery Mission