Every morning after her coffee, Janet gets to work at her desk, sprinkled with tubes of paint and brushes. The colourful artwork on the wall reflects through a fishbowl, where her goldfish swims. Janet wears long, beaded white and silver earrings, matching her salt and pepper hair. The wrinkles on her face revealing the years of her turbulent life, her eyes beaming with soul and compassion, she draws in her sketchbook. Lately, she’s been reproducing works from the masters to learn from their techniques; Monet and Klimt are two of whom she most admires. A multi-talented artist, she also writes poetry and music, as well as sings and plays guitar.

Janet may not sound like she lives the life of a homeless woman, and she doesn’t—not anymore. Today, she lives at the Old Brewery Mission’s Andrée and Roger Beaulieu Pavilion and benefits from La traversée, a program offering housing units for previously homeless seniors. But she hasn’t always been so lucky as to have a place to call home.

Born in the small town of Kipling, Saskatchewan, Janet has lived all over Canada and the US. After completing a bachelor’s degree in sociology, she became restless and fed up with her studies during her first year as a master’s student. She decided to explore the world. During her travels, she learned to play guitar from musicians she met along the way. But Janet didn’t just want to play for tips, she wanted to make a difference. 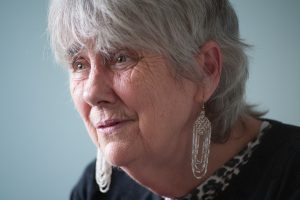 While busking in Nashville, Tennessee, and cleaning homes for extra income, Janet decided to organize a benefit concert to raise funds for the homeless. She hoped to raise enough to put a down payment on a house for a group of Vietnam war veterans that she knew were living under a bridge. When she moved back to Canada, she tried organizing a similar event for aboriginal youth. But to her disappointment, she wasn’t able to raise enough funds for a famous Canadian musician to play at the concert.

In Vancouver, Janet was inspired by the beauty of the landscape and artists from the area, such as Emily Carr, and immersed herself in visual arts. In Saint John, Janet tried everything to make a living out of her art but couldn’t find a gallery that would accept her work. The inheritance money she had received from her mother’s passing had run out before she was able to get on her feet. Her siblings, one sister and two brothers, didn’t offer much support.

Signs of a New Beginning

After living on the street for some time in Montreal, Janet eventually ended up in the hospital, where she was bedridden for three months. “I had given up on life,” she says. When she got to the Mission’s Patricia Mackenzie Pavilion, she was thankful that the staff didn’t force strict rules on her. Instead, she says, “They just made helpful suggestions about things I should try. They let me be me.” 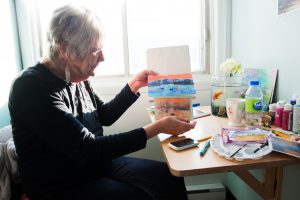 Sitting in the park one day, she asked God for help and soon after, someone started playing ‘Amazing Grace’ on a public piano. The same day after lunch, she ran into her friend after months of not having seen him. When Janet met him, she immediately fell in love with his strong spirit. “He was living on the street, but he was a survivor and drew people to him. That’s why I would sketch him and his friends; I was so amazed by this young man,” she explains. For Janet, the coincidental events of the day were signs of a new beginning.

Since that day, Janet has moved from the Patricia Mackenzie Pavilion’s emergency services to stable housing at La traversée. “To me, it’s a miracle to go from a state where I can’t get out of bed to my current state, where I get up and work on composing songs and my art. And I’ve been accepted by an art gallery! All of these unbelievable things have happened to me,” she says. “One of the things I’ve learned while living in Montreal is patience. That everything comes with time and work.”

Janet gives special thanks to Clemence, Constantin and the rest of the team at the Patricia Mackenzie Pavilion and Andrée and Roger Beaulieu Pavilion, whom she holds dear to her heart. 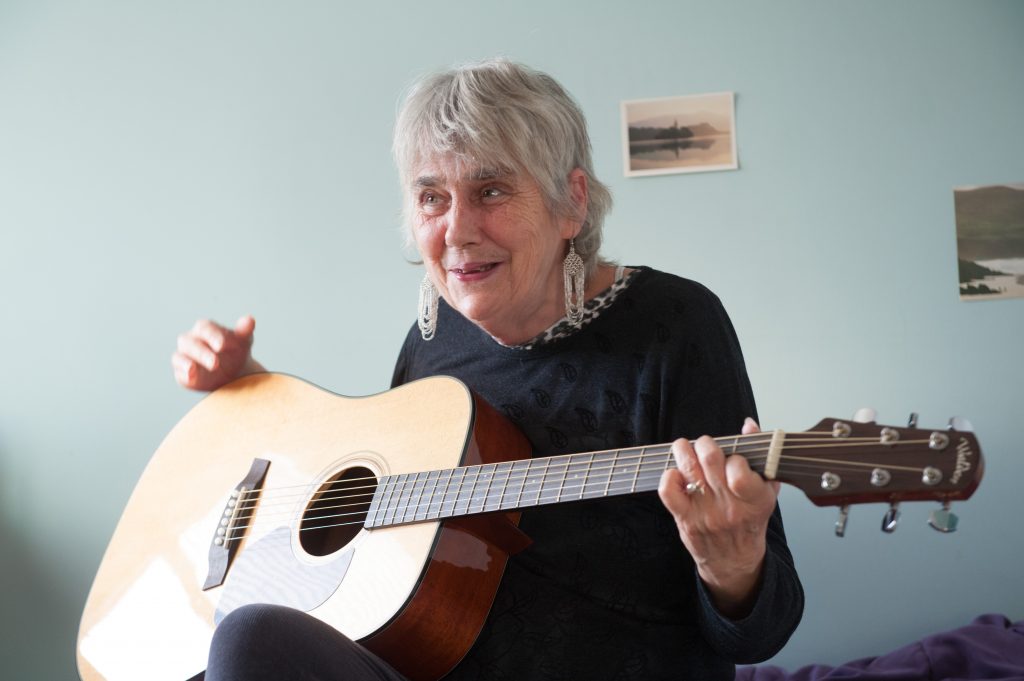 The following is a poem Janet wrote based on her life:

I walked for miles, my feet swelled up
singing in the metro with a paper cup
Sleeping in parks during the day
up all night at Tim Horton’s till they send me away

Met Junior in park Beaudry
I painted he and his gang at play
“Interested in art?” I would say
to the gay men at the metro entryway

I found a home, finally, at Beaubien
I sing for the love in the metro again
Behind me a sign announcing “la musique, je t’aime”
women smile softly as they pass by
Children and lovers with sparkling eyes
People rush down the stairs and look up and smile
Some with more time stop to listen a while

The memories of homelessness have started to fade
miracles happen in each precious day
Sunlight streams though the window as I work on my art
painting for a gallery up the street on Saint-Laurent
I try to trust in the creator’s plan
the guidance he gives to each woman and man
Obstacles that he put in my way
have taught me the courage not to run, but to stay