Shoshan lives across from the Maisonneuve Market in the Hochelaga-Maisonneuve neighborhood popularly known as HOMA. Rapidly gentrifying, the area is seeing trendy new shops and restaurants crop up, attracting younger people to her neighborhood. She has a nice studio apartment, food in the fridge and money in the bank. Shoshan is safe and comfortable, but she wasn’t always so lucky.

A Journey Marked By Resilience

Originally from the Naskapi Nation of Kawawachikamach, small community of a few hundred people in the Côte Nord region of Quebec, Shoshan lives at our Lise Watier Pavilion (LWP), a 29-studio social housing residence for previously homeless women. Her journey from one to the other, into homelessness and then out, is one of strength and spirituality.  Now she has a message for other Indigenous people: we’re worth getting off the street.

“I used to sleep outside in places like Parc Émilie Gamelin with my husband when he was still alive. Those were hard times that bring up a lot of sad emotions, but I have some good memories, too,” recalls Shoshan. “I remember when trucks from community organizations would come by every week and bring food like coffee, desserts and hot dogs. That’s how I lived back then—don’t ask me why—but I did.” 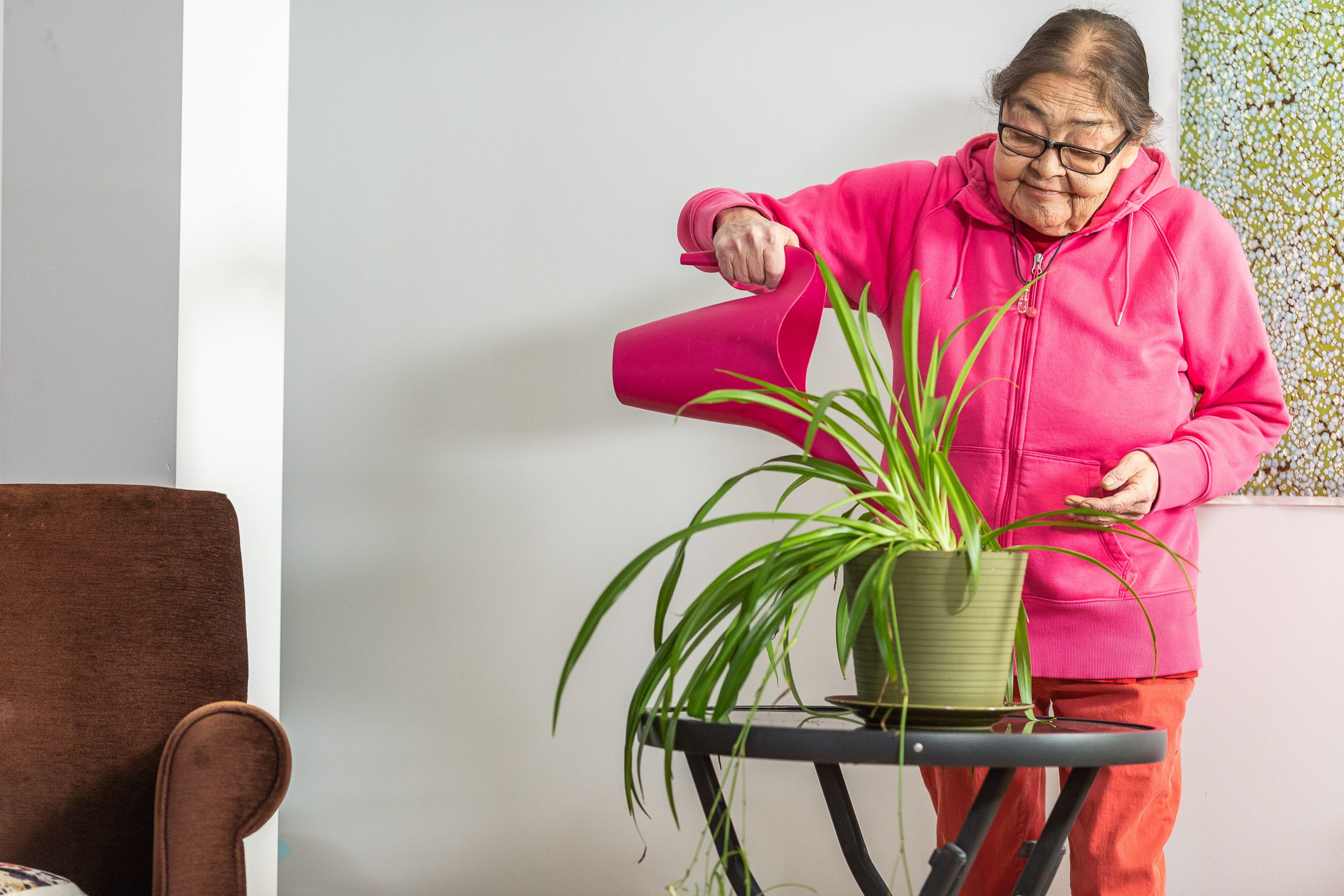 Shoshan is one of many Indigenous people who has experienced homelessness in Montreal. According to the last point in time count, it is estimated that while Indigenous people make up 0.6% of the city’s general population, they represent 12% of visibly homeless people in the city. Homeless Hub maintains that “homelessness amongst Indigenous Peoples can be traced back to historical trauma, oppression, racism and discrimination. Homelessness amongst Indigenous Peoples should be considered as a consequence resulting from Canada’s history of colonization and exploitation of Indigenous land and populations.”

“A lot of Native and Inuit people become homeless and come to Montreal because of family problems,” explains Shoshan. “For example, they might have been rejected from their families and communities for their sexual orientation. In Montreal, they’re free to be who they really are, but a lot of them are on the street.”

An Exceptional Capacity for Empathy

Shoshan maintains ties with her community by visiting old friends in downtown Montreal. “Sometimes, I like to go downtown and talk with the old gang. A lot of them have passed on, but I still see a lot of them. We have a lot of mutual respect for each-other. Even if they are under the influence, I still listen to them. They tell me stories about what they’ve been up to and we catch up,” she says. But for Shoshan, it’s more than just catching up. It’s about supporting her community in her own way and spreading her message of love and acceptance.

“Some people might think that homeless people are not worthy. And sadly, homeless people might think the same because maybe they struggle with addiction and don’t believe in themselves. But when I talk to them, I don’t tell them what they should or shouldn’t do—it’s not my place. Maybe they aren’t ready to change. It takes a lot of mental strength.”

The Role of Spirituality

For Shoshan, garnering the mental strength to change her life meant embracing her spirituality.  “When I was changing my life around, I would always tell myself ‘yes I can, yes I can’ and tap into my Native spirituality by talking to the creator. I thank the creator each day that I’m alive. I talk to my grandma and if I’m in a dark place, I’ll ask her to send me light,” she says. “I’ll also burn sage or sweetgrass to smudge my home to get rid of any negativity.”

Nicole Graffe, Coordinator of Social Housing for Women at the LWP, has seen first-hand how Shoshan has grown happier and more confident. “She was in the street for many years and still has memories of sleeping on the ground and having no money to eat. The stability of her first home allowed her not only to learn the tools to be self-sufficient, like cooking for herself and budgeting, but also to find herself again. She’s a whole new person. She spreads her message of gratitude to the other ladies who live in the pavilion and has a positive influence.”

If I won the jackpot…

Having participated in our latest awareness campaign, Shoshan is determined to help get the word out. “I’m proud to be part of this project because living on the street was my life, but it it’s not anymore. The Mission really helped me a lot—to get my life back, to stand on my two feet and to believe in myself,” she goes on. “If I won the lottery, I would give it to the shelters here in Montreal—that’s my dream. I want homeless and Indigenous people to know that we are worth getting off the street. I want them to know that there are people at the Mission who are here for them, who care for them and who are putting them first.”

A message of love and compassion

Her message is also for the youth. “Another dream I have is to go back to my community of Kawawachikamach to talk to the young people and tell them about my life and my struggles. I want them to know to be careful and to stay away from drugs and all the hardships that come along with them.”

Shoshan has a final message from the heart for anyone experiencing homelessness. “First, you have to believe in yourself. Whatever your religion or spirituality, you have to pray a lot and ask your higher power for help. And if you need my help, I’m always here for you—don’t forget that. I love you and the creator loves you, too—no matter what.”

As a research-based homelessness organization, the Old Brewery Mission strives to better understand the needs of the Indigenous community as it relates to solving homelessness. Our partnership with Projets autochtones du Québec, a non-profit organization based upon social and professional development of First Nations, Metis and Inuit of Quebec territory, helps us reach that goal.