A press conference was held at the Old Brewery Mission’s Café Mission Keurig® Monday, July 22 to announce $890,000 over the next 5 years from the Veteran Family and Well-Being Fund to finance the Sentinels of the Street program. The first of its kind in Quebec, the program aims to provide veterans who are homeless or precariously housed with the support they need to stabilize their situation, find suitable housing and reintegrate into the community.

Notable guests included the Honourable Lawrence MacAulay, Minister of Veterans Affairs and Associate Minister of National Defence, who made the announcement, Eric Maldoff, Chair of the Mission’s Board of Directors, Lieutenant-General (retired) Yvan Blondin of the Fondation Québécoise des Vétérans, Honorary Colonel Colin Robinson, Chair of the Mission’s Veterans Committee, Daniel Lalonger, a military veteran and participant of the Sentinels program, as well as other members of the federal government, the Mission’s Veterans Committee and Mission staff, donors and partners. 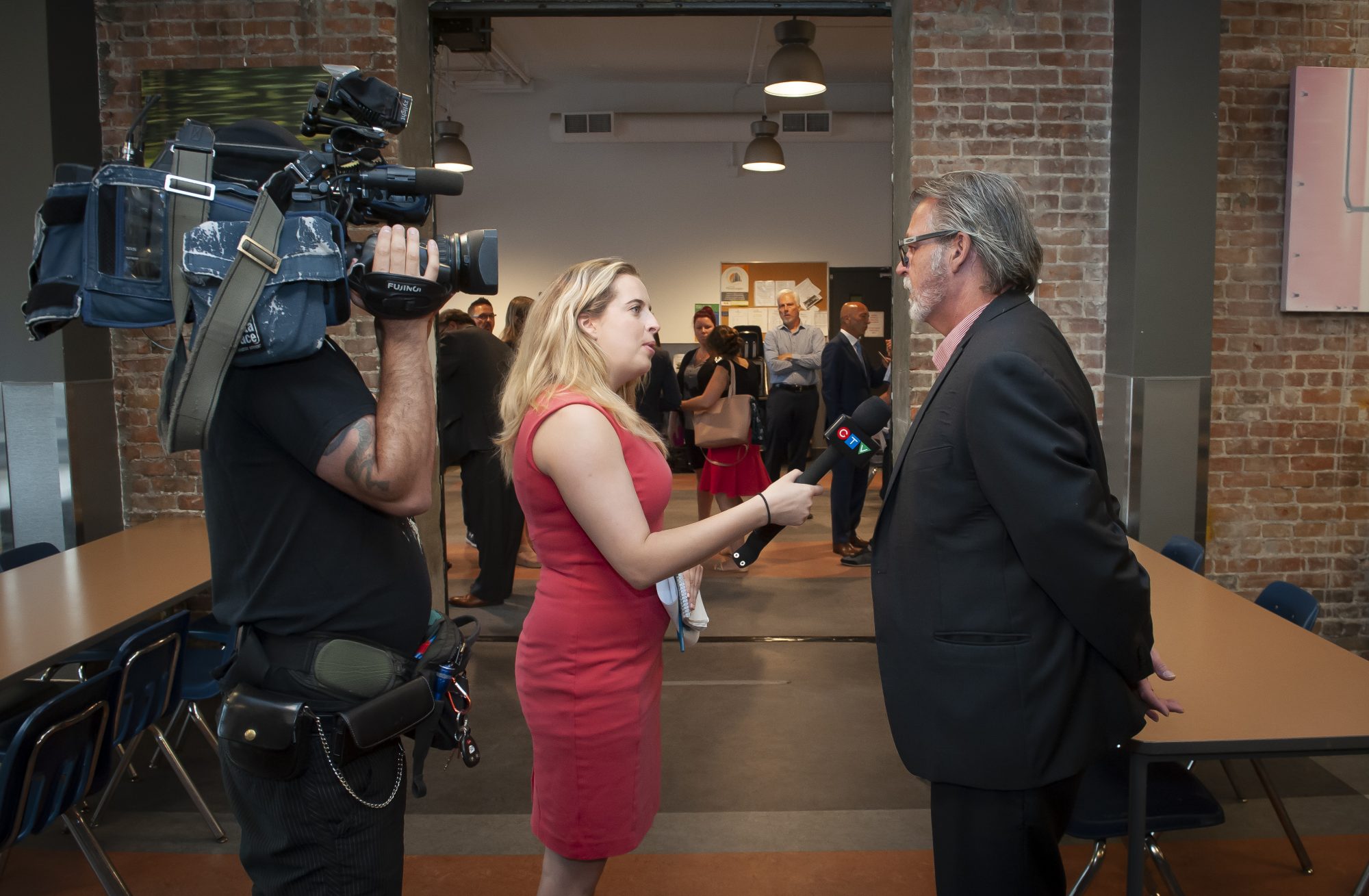 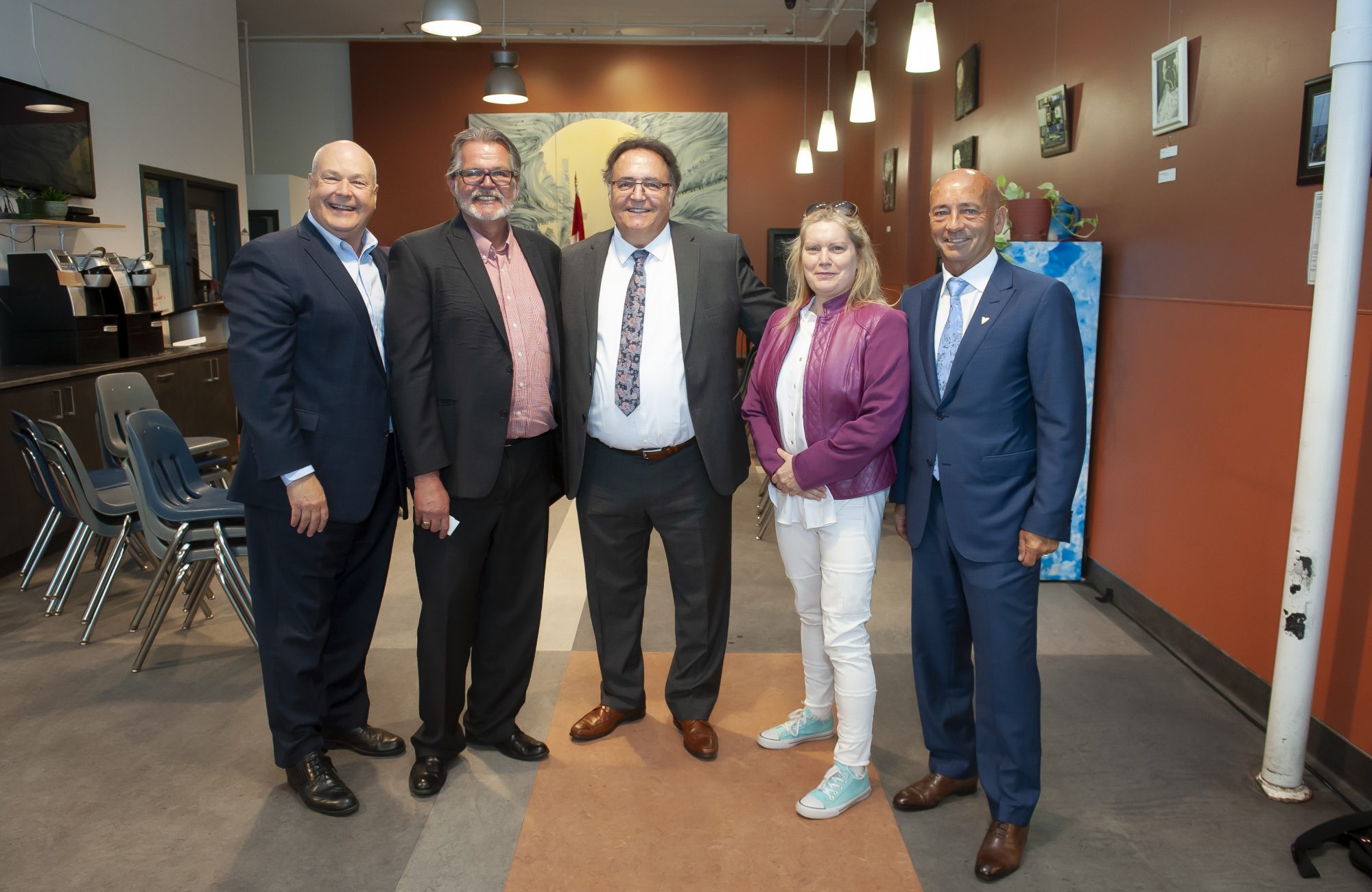 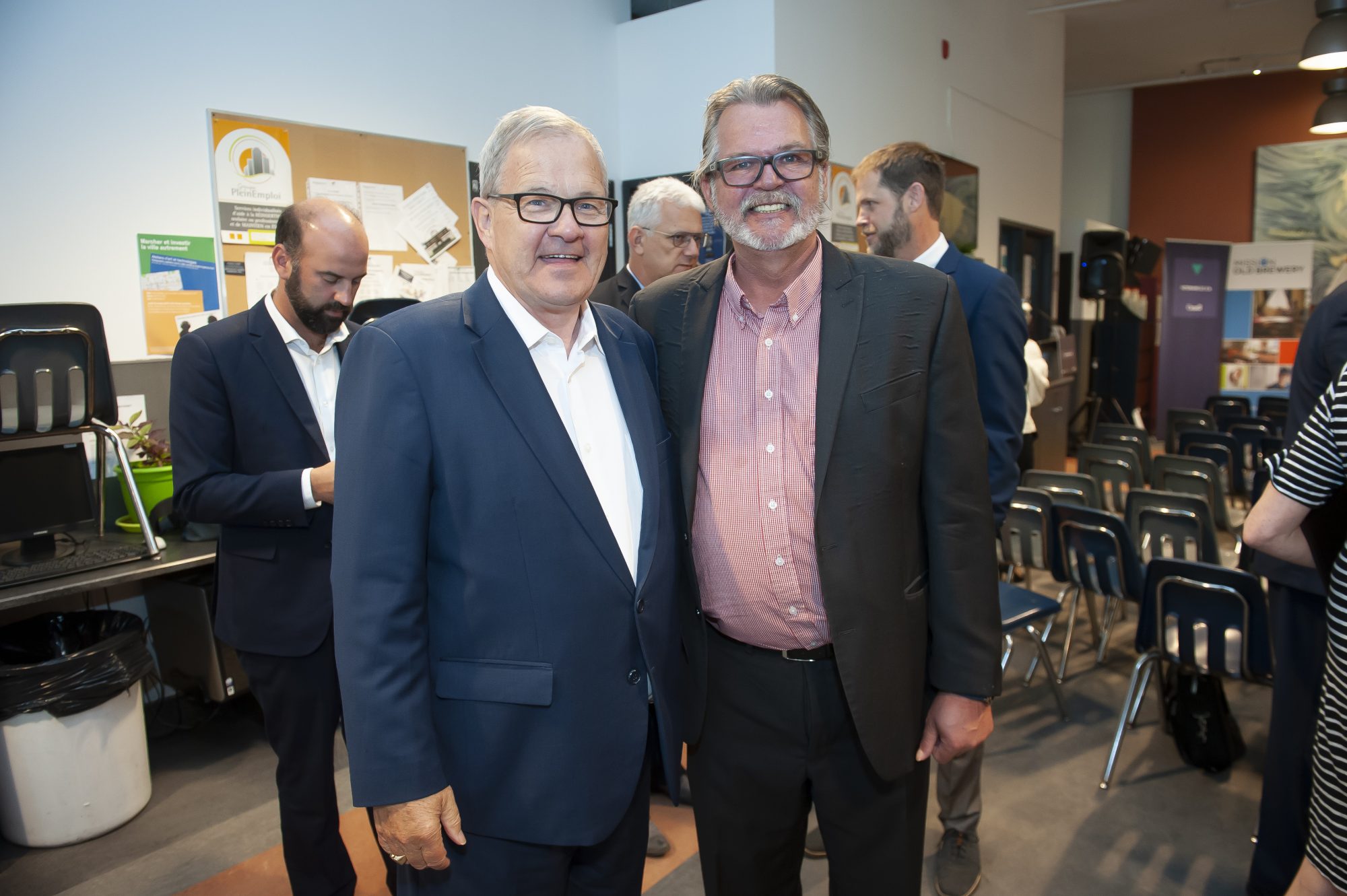 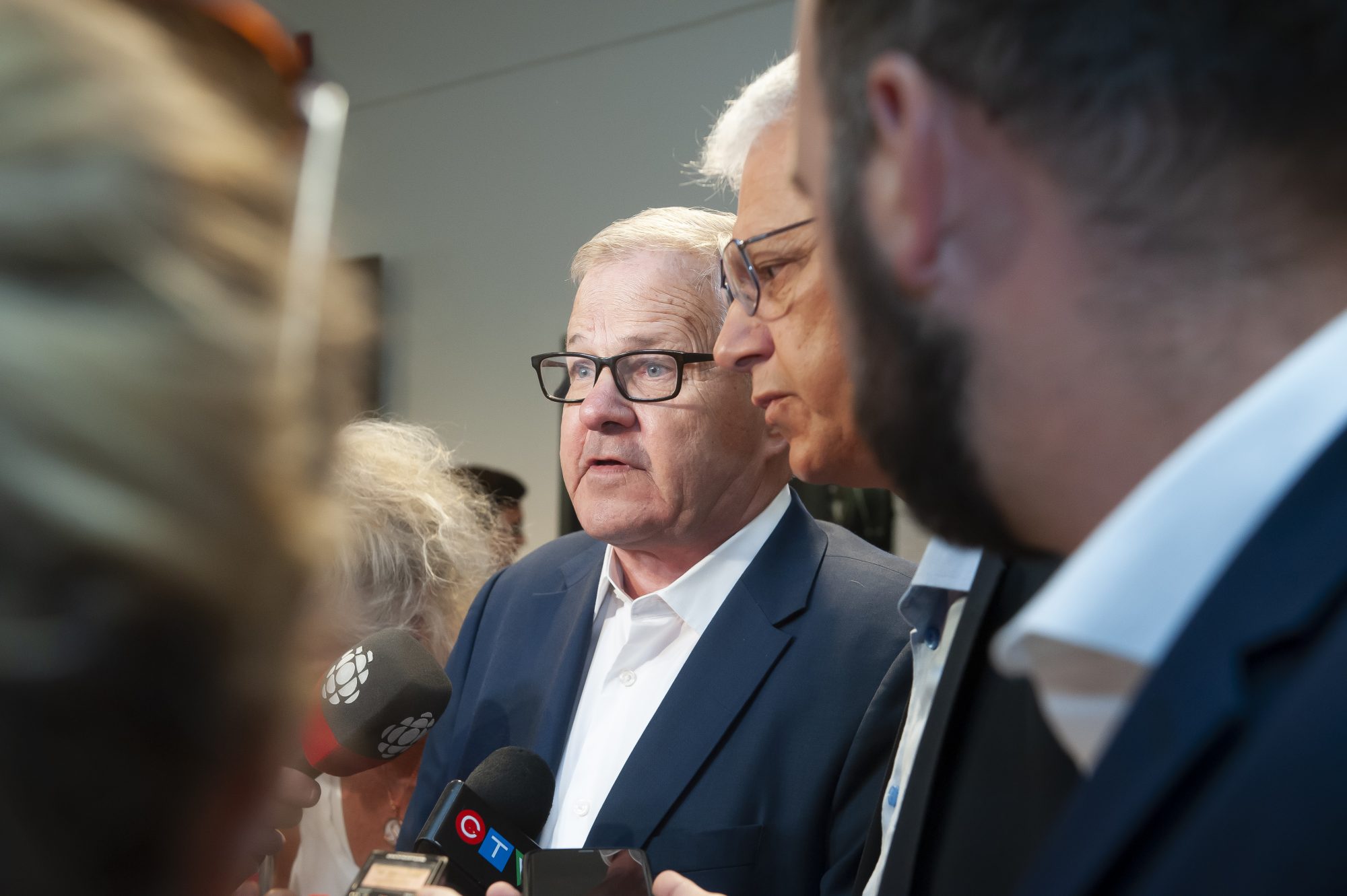 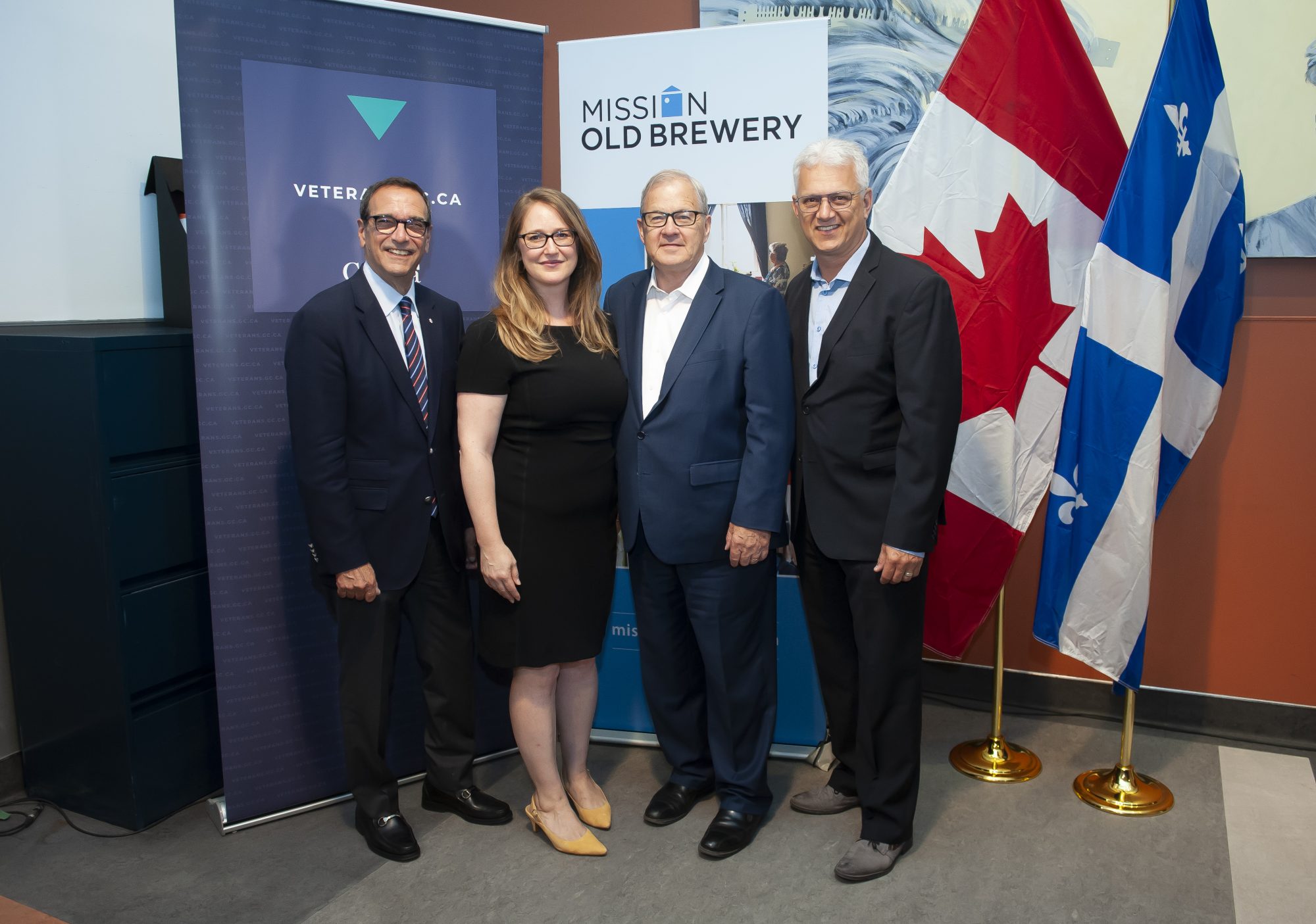 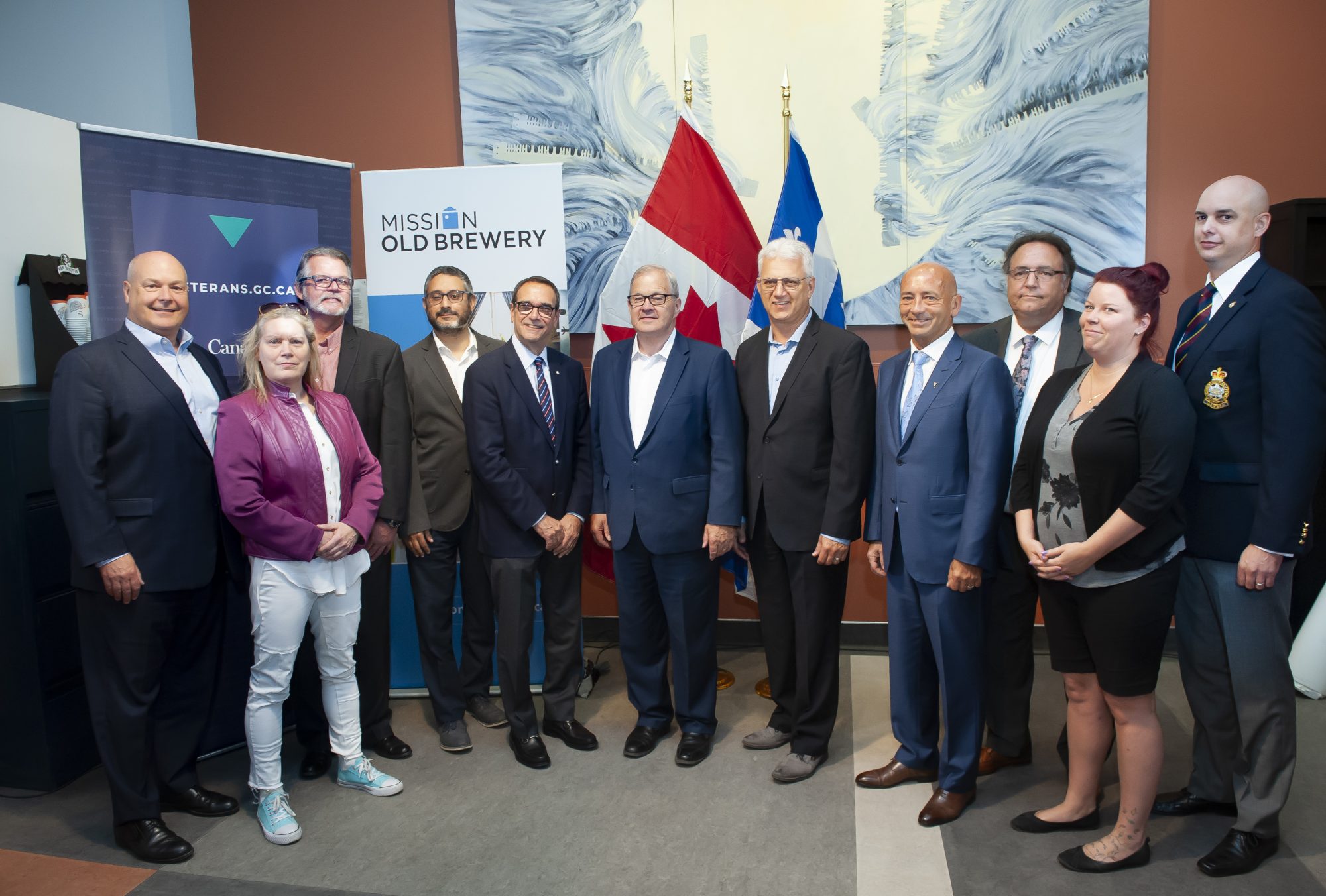 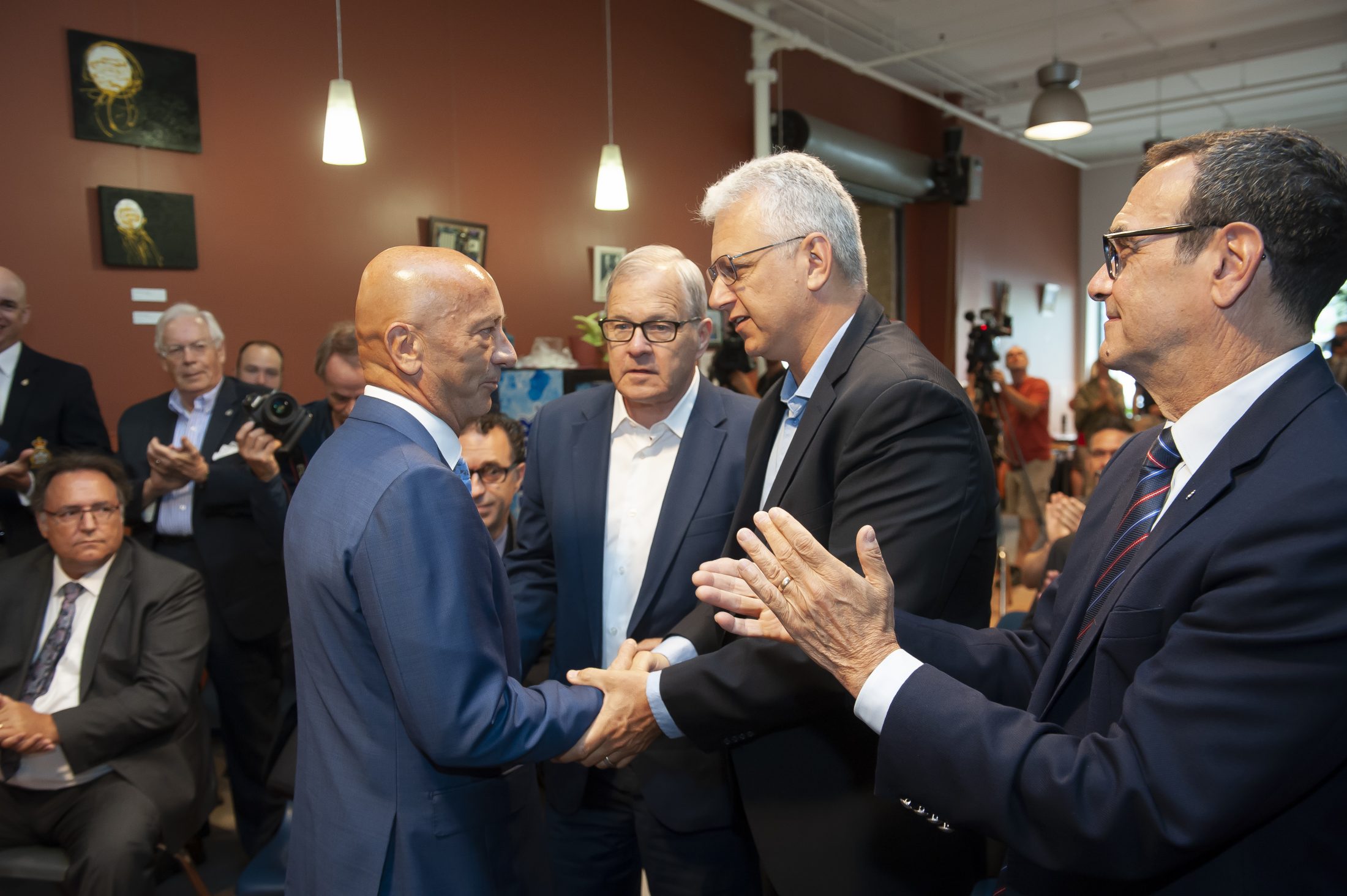 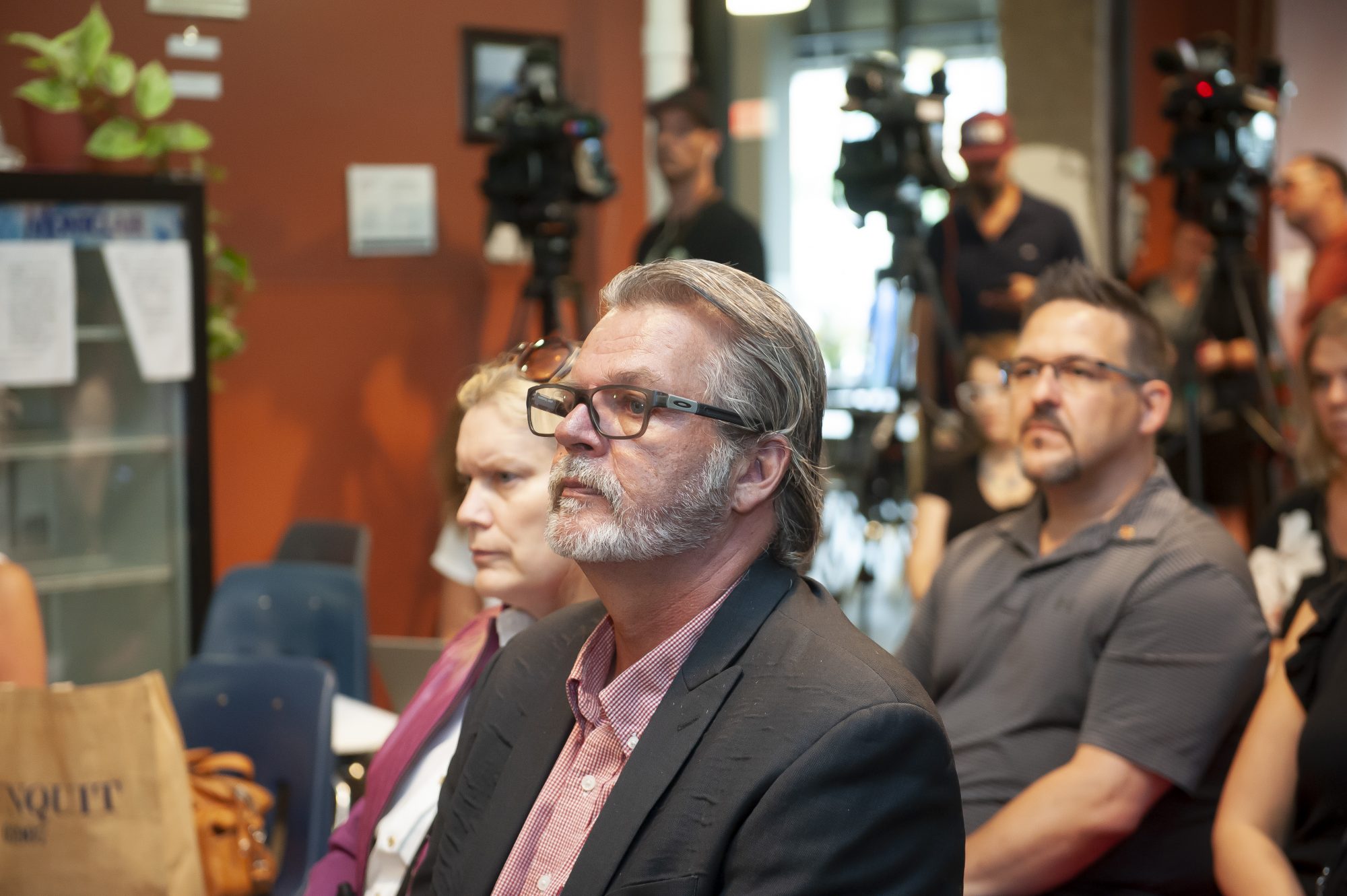 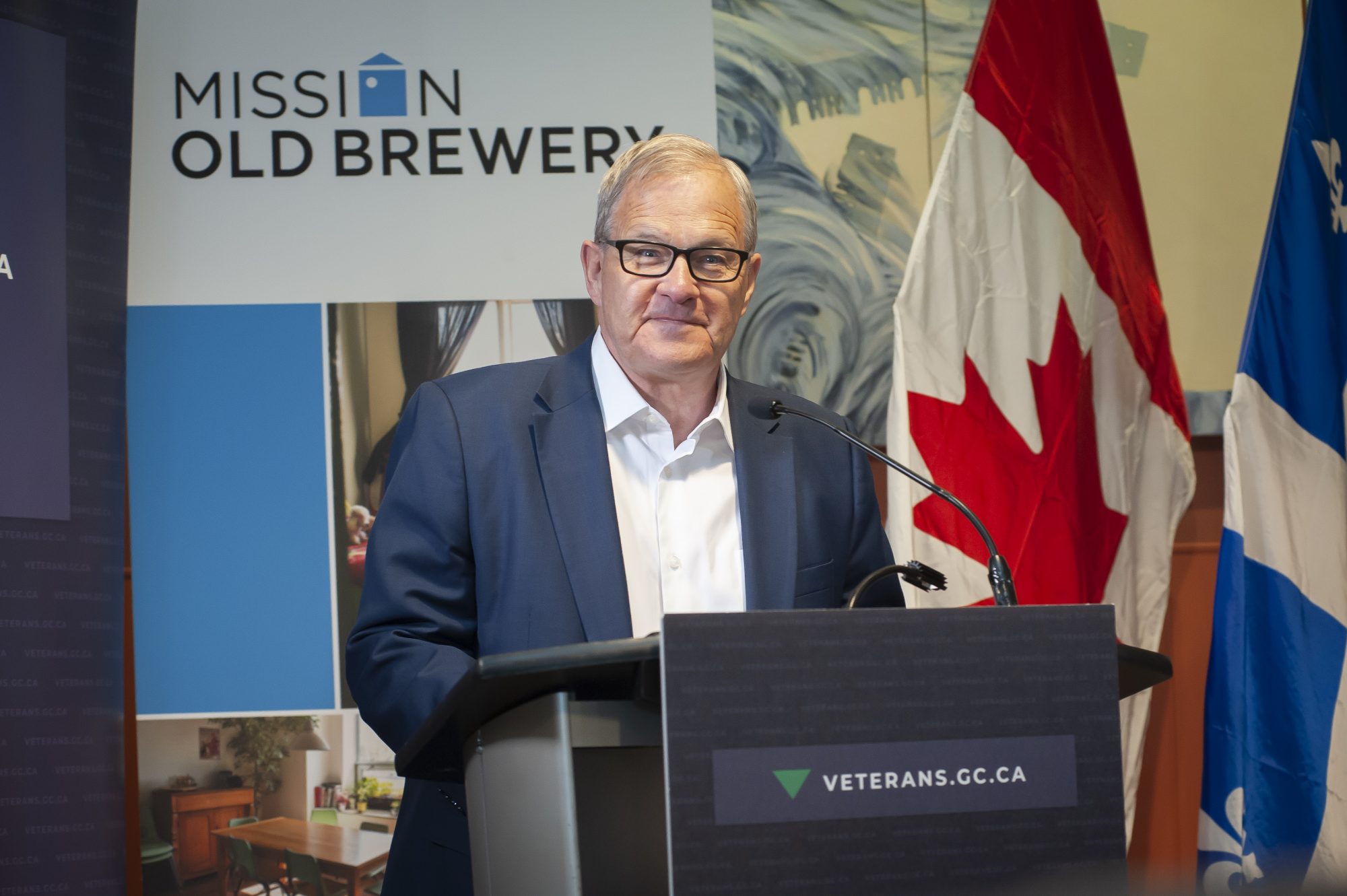 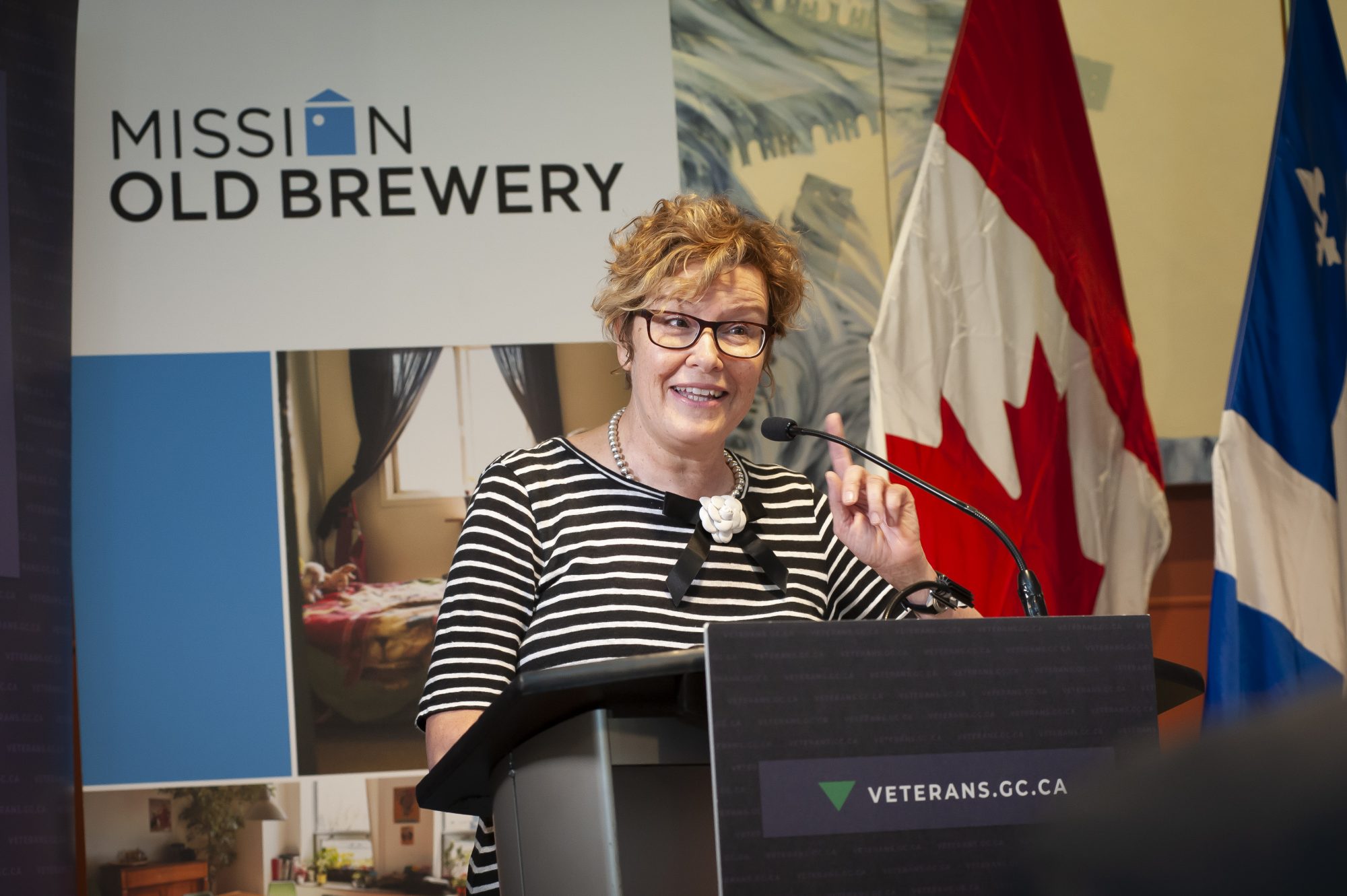 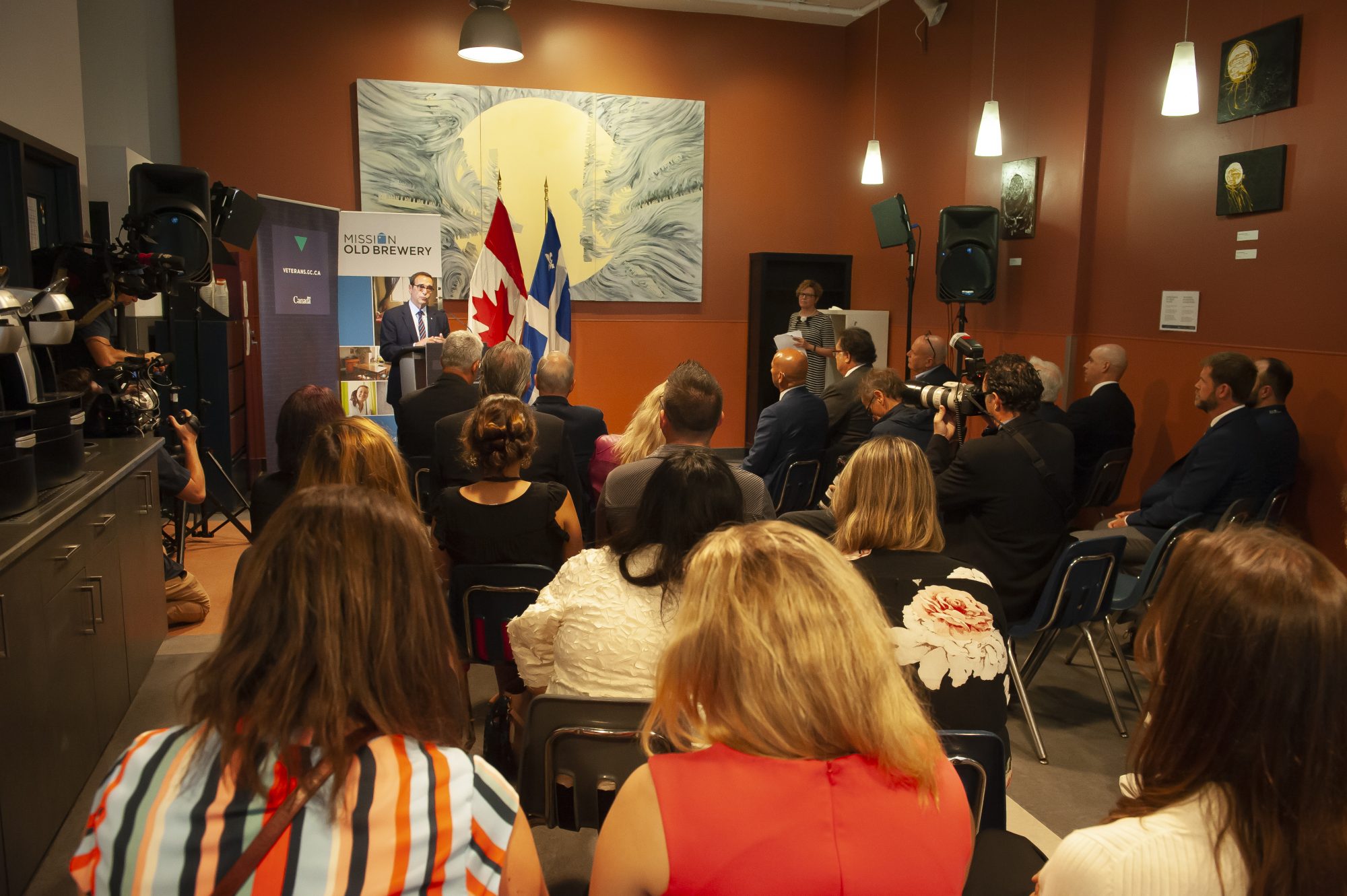 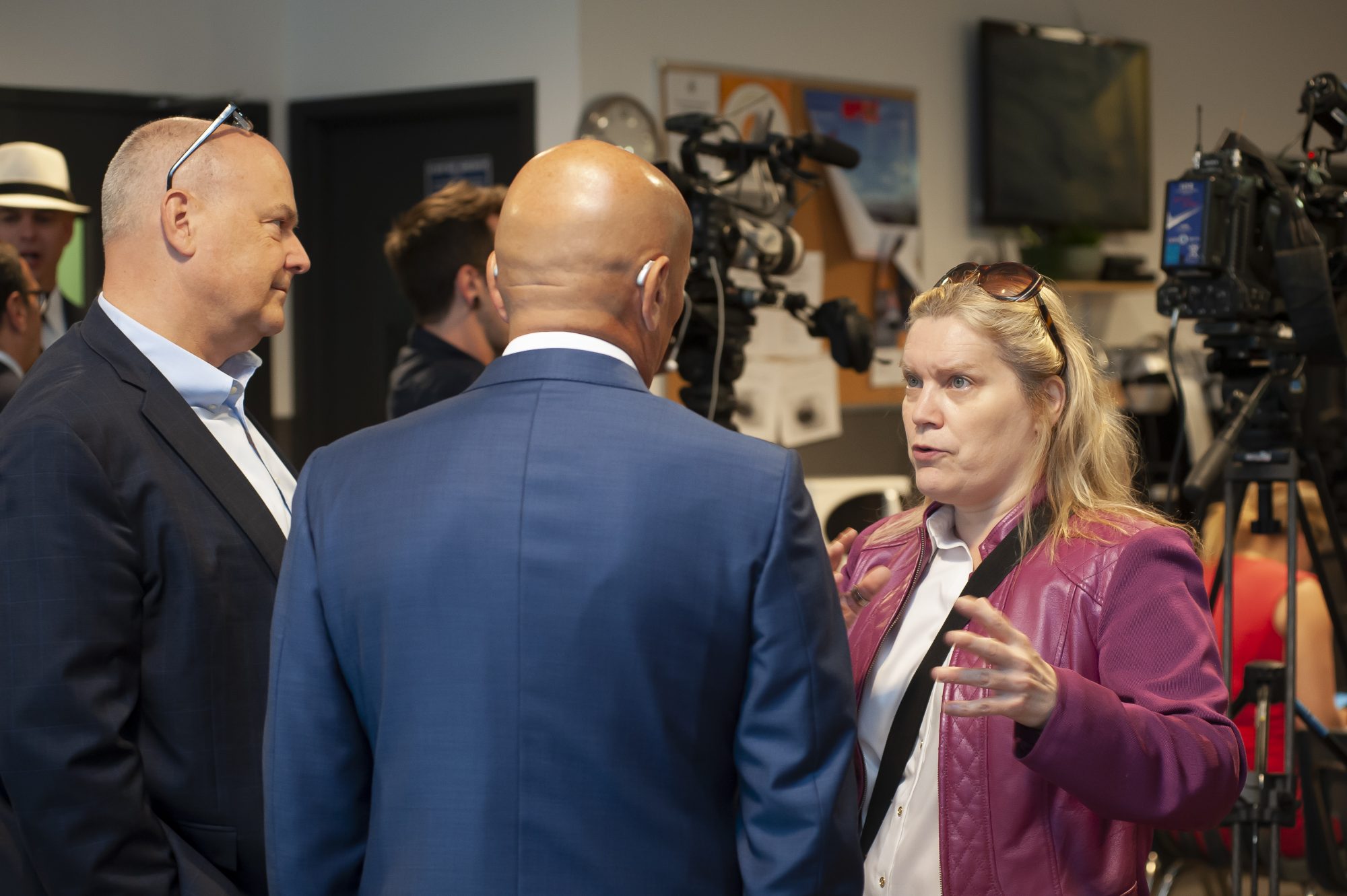 The funding will ensure the continuity of the Sentinels program over the next five years and its mission to end veteran homelessness in Montreal. While veterans make up about 2% of our clients—a relatively small number—we noticed that many of them need specialized services to be able to overcome particular challenges including serious, persistent mental or physical health issues and addiction. That is why, in 2017, we initiated a program tailored to the needs of homeless veterans.

The Impact on Veterans

Daniel Lalonger is one such veteran. Periodically homeless for several years, he experienced childhood trauma and entered the Canadian Army at 18 years old. “I don’t blame the army for my troubles and am grateful that I can get help with my veteran status,” he said. “I take life one day at a time.” Daniel was on the edge of going back to the street and eventually found himself at the Mission for a hot meal. After learning about the Sentinels program and meeting Kasandra Szalipzki, Mission counsellor for the Sentinels program, she recommended him for the program and took him through a screening process with VETS Canada to confirm his military service. After some time searching for a suitable living space with Kasandra’s help, Daniel finally settled into a place of his own, where he lives today.

Another example is Mario, who is no longer dependent on our support. After meeting someone at another shelter who told him about the Sentinels program, he made his way to the Mission and met with a counsellor who helped to quickly move him out of our emergency services and into a place of his own. Today, Mario has fully reintegrated the community and has reunited with his family.

Daniel and Mario are just 2 of the 16 participants who have been housed since the start of the program in 2017. With a promising 88% success rate, we have our partners to thank for making the Sentinels possible and its mission to end homelessness among veterans.

The Sentinels was originally made possible with a grant from the Innovations Fund of the Ministry of Families, Children and Social Development in 2017. Today, the program exists with the support of the Quebec Veterans Foundation, VETS Canada, the Canadian Legion and Veterans Affairs Canada.

For the Honourable Lawrence MacAulay, “the Veteran Family and Well-Being Fund is about encouraging bold thinking and new ideas to meet the needs of Canada’s Veteran community,” he stated. “We are investing in projects with the greatest positive impact on Veterans and their families.”

“This new funding from Veterans Affairs Canada will not only bolster our Sentinels of the Street program, but also sends a positive message that the federal government is taking ownership of the problem. By supporting community-led initiatives, VAC is demonstrating its intention to collaborate with those on the front-lines working to end veteran homelessness in Canada,” declared Matthew Pearce, President and CEO of the Old Brewery Mission.

“Thanks to the network formed by our various partnerships with organizations in the community, veterans can be easily referred to the program. Our partnerships include close collaboration with the city’s other major homeless organizations—Accueil Bonneau, Welcome Hall Mission and La Maison du Père. With the CHUM, CIUSSS and others from the public health system, we’ve created a new model of multidisciplinary services, one that includes the care of psychiatrists, nurses, social workers and other healthcare professionals within the walls of our facilities, right where the services are needed. The resulting continuum of services ensures that our veterans don’t fall through the cracks,” said Eric Maldoff.

Read more about the announced funding on the Montreal Gazette and CBC News. For French articles, consult La Presse and Journal Métro.